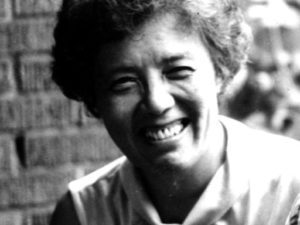 Grace Lee Boggs died at the age of 100, having dedicated over 70 years of her life to social activism. She fought for civil rights, labor, feminism, the environment, and so many other causes she valued. Born to Chinese immigrant, Ms. Boggs embarked on an odyssey in the states that made her an American Revolutionary.

Lee attended Barnard College at sixteen, and earned her doctorate in philosophy from Bryn Mawr in 1940. Despite her brilliance, universities would not hire a Chinese-American woman to teach political thought. Instead she used her talents in Chicago with tenant organizations. She joined various social and political parties until she found The Johnsonites. She moved to Detroit in 1953, that same year she married fellow Johnsonite, James Boggs.

Lee Boggs believed in a philosophy of constant questioning. This allowed her to imagine and reimagine how we as individuals should interact with each other, our communities, and the planet. She said:

“People are aware that they cannot continue in the same old way but are immobilized because they cannot imagine an alternative. We need a vision that recognizes that we are at one of the great turning points in human history when the survival of our planet and the restoration of our humanity require a great sea change in our ecological, economic, political, and spiritual values.”