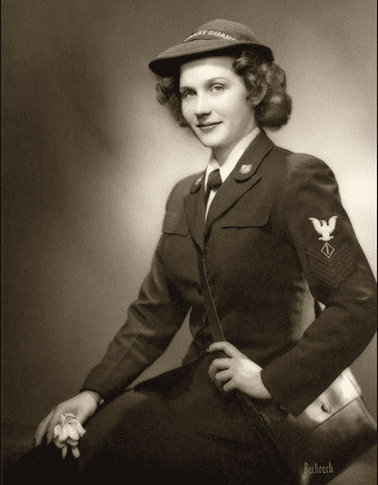 Today is the 75th anniversary of D-Day when over 160,000 soldiers invaded Normandy, France, the largest seaborne operation in our history and a turning point in WWII.

​The number of people who suffered on that day is overwhelming. So, I look for inspiration from individual stories of the people who worked silently to end the war. Many of these people are unknown to us, but they have had a big impact on their families and the people that knew them.

Today I would like to share with you one of these incredible stories of my friend’s mother. Her story left a lasting impression with me ever since she shared it last summer. Thank you Elizabeth Faucher for sharing your mother’s incredible strength with us.

Maralyn Spencer’s dad, Walt, called her Joey, and always had a special soft spot for this spunky girl who defied so many of the conventions of her day. Born in 1922, she was the barely younger sister of “pretty & proper” Jeanne, a tomboy and A student whose sharp intellect was always leavened by a kindness that drew people to her. Until her younger brother came along, Joey was the one who played catch with her dad, read the Great Books she was destined to later teach, never missed a day of school all the way through high school, and picked up a lifelong love of bowling by tagging along to the lanes with her dad to his weekly league play.

After graduating high school at the top of her class, Maralyn went to work for the phone company, glad to have a job in 1940 but a little restless in Des Moines Iowa. A little more than a year later, at the age of 19, she heard the call to serve her country. What she said was: “Dad, I’ve been thinking a lot about this, and someone from our family needs to serve – Jack is too young, and I think I should be the one to go. I want to enlist in the Coast Guard!” On the walk home from the recruiting center, where she had needed to have a parent “co-sign” with her to enlist, Walt said “Joey, what did your mother say when you told her about this?” she said – with a big laugh – “Oh Daddy, I thought YOU would tell her!!”

In a matter of weeks, Maralyn had moved to Washington DC, joining many thousands of women serving in support positions for various branches of the service. As a member of the coast guard, she primarily worked in the cryptography area, essentially doing the arduous and highly manual work of code-breaking. While this was very serious and important work, the move to Washington DC was also an adventure for a confident and somewhat adventurous young woman from the Midwest. The city was buzzing and exciting, filled with other idealistic but committed young people, and particularly for Maralyn, many like-minded young women who had strong ideas about what they could contribute to the war effort. While she was in the service, Maralyn even earned her pilot’s license, but she always saw the day to day work that she and her fellow SPARS, WAVES and WACs performed was the essential foundation to the war effort, so she never tired of the grinding nature of her cryptography work.

After the war was over, Maralyn took advantage of the GI bill to go to college, finishing her degree in accounting in just 2.5 years. One of her professors had encouraged her to aim higher than the bookkeeping courses she had been steered to, since she had such an aptitude for math and business. After graduating and sitting for the CPA exam – and passing all four parts in her first try – she applied for a job with the IRS, which involved taking the civil service exam. The examiners discouraged her from bothering to take it – telling her that veterans would be favored to get any available positions… With that winning smile that carried her through so many trials and tribulations in her life she said, jauntily – “that’s all right and good for me – I AM a VETERAN!!”
​
Maralyn went on to be a lifelong CPA and advisor to so many, mother of 7 and grandmother of 10, friend of hundreds and example to all…what an amazing life! #dday #womenx