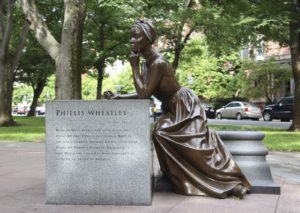 In 1773, Phillis Wheatley became the first African American woman poet published, when her book of poetry, Poems on Various Subjects, Religious and Moral, was published in London.

Wheatley lived a life unique from the typical slave experience while the Wheatley family lived. Born in West Africa, Phillis, age 7, was sold into slavery, arriving in Boston that year. She was considered unsuitable for hard labor because she was a small child that wasn’t in the best of health. John and Susanna Wheatley purchased her for domestic help and named her after the ship she was brought to Boston on, the Phillis.

Phillis’s talent was recognized early. She was relieved of some, not all, of her domestic duties, in order to be educated along with the Wheatley children. Even after Phillis gained notoriety, her life was difficult. She left London soon after her publishing to tend to Susanna Wheatley who was chronically ill. Most of the Wheatley family died between 1774-78. Although she continued writing, Phillis was unable to sell and publish with the same ease on her own.

Phillis was known for incorporating biblical symbolism to comment on slavery. Although being manumitted, life was very difficult in the colonies for free black people. After marrying but falling into poverty, Phillis died on December 5, 1784 on the same day as one of her children. Much of her life is unknown between 1776 and her death. Over the past decade, scholars have uncovered writings and connections she had to 18th century abolitionists. Like so many before and after her, the impact and influence of her career was largely unseen during her life. Every day more information about her life and writings become known and her impact on Black and Women’s history grows.