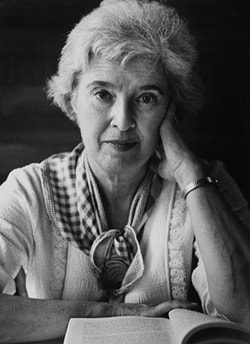 “Strengthening our depth perception requires accurately seeing with both eyes. When we see with one eye, our vision is limited in range and devoid of depth. When we add to it the single vision of the other eye, our range vision becomes wider, but we still lack depth. This is only when both eyes see together that we accomplish full vision and accurate depth perception.”-Gerda Lerner

Why should we study Women’s History? The easy answer is, we must see clearly.

Born April 30, 1920 in Vienna Austria, Gerda Lerner was raised in a household with constant dueling ideologies. Her father was a pharmacist, while her mother pursued a bohemian lifestyle that advocated sexual freedom, vegetarianism, and explored avant garde art. With her parents seemingly moving in different direction, they chose to reinvented their marriage, rather than divorcing. Divorce would have stripped her mother, Ilona Kronstein, of custody of Gerda, and her sister, Nora. Other family members, including the girl’s grandmother, didn’t like the bohemian influence of Ilona Kronstein. Since her grandmother lived in a different apartment, but same house, she had regular access to the girls, which lead to a volatile environment. Robert Kronstein and his mother often opposed, Ilona’s idea and desires for herself and her children.

Lerner’s parents ended up living separate lives in the same home. Ilona had her own room, and eventually bought a separate studio where she hosted her various paramours. Robert Kronstein, did the same, acquiring a separate apartment for his mistress. Gerda and Nora had to make appointments to see their mother, their daily care mainly being handled by nannies and other caretakers. Although Gerda talks about the strain that this familial arrangement had on her relationship with her mother, in her autobiography Fireweed, observing her mothers unapologetic lifestyle was an early education in female independence that she appreciated later in life.

As Lerner got older she embraced more of her mother’s influence and began to see her mother as a victim, unwilling to conform to society’s idea of what a wife and mother should be. This led her to embrace jazz and modern literature, which was radical content at the time.

Throughout Lerner’s teen years she became more radicalized and was sent to England by her father, so she could learn the English language and to separate her from friends and a boyfriend he didn’t care for. Unfortunately, the family she stayed with were anti-Semites, so with permission from her father, she joined a youth camp in Wales held by Communist J B S Haldane that exposed her to Marxism.

At the start of World War II, Lerner arrived in the United States, sponsored by a boyfriend she married to get in the country and divorced in 1940. Soon after she met Carl Lerner, a Communist theater director. They married and moved to Los Angeles where Carl worked as a film editor and Gerda began writing short stories. They collaborated on screenplays, including Black Like Me in 1964, which Carl directed.

She soon became a national leader in the Congress of American Women (CAW), affiliated with the Women’s International Democratic Federation, influenced by Communist theories. With the CAW she worked with poor black women and began to understand the limitations of her own wealthy upbringing and the assumptions she had developed.

When challenges to Communism’s arrived, Carl Lerner’s career in Hollywood ended. They moved back to New York where they settled into a home in Astoria, Queens. The Lerner’s wanted to expose their children to as many cultures as possible. Gerda became active in women’s groups like the National Organization for Women (NOW) and the Parent Teach Association. NOW included black women, union members, and more leftist views. At age 38, Gerda started college and received a B.A. and PhD from Columbia University. Writing her dissertation on the Grimke sisters, children of slave owners that became antislavery activists and early women’s rights activists, was her way of furthering her belief in racial and gender equality.

Her dedication to equality continued for the rest of her life. Her book Black Women in White America is one of her most influential writings. There was so little information about black women’s experience but her book proved that African American women’s history could be written.

As a professor at Sarah Lawrence College she wanted to build a women’s history program, but was met with rejection because administrators felt, since they were a women’s college, it was unnecessary. She succeeded in establishing a Masters program, which still exists today.

In the late 1980’s and early 1990’s, Lerner published in two parts, Creation of Patriarchy and Creation of Feminist Consciousness. In it, she outlined that the patriarchy was the first source of all oppression.

Gerda Lerner’s career is marked by clarity of how power dynamics work and higher consciousness of how we are all related; rejecting inequality and oppression based on class, race, and gender. She was unapologetic, and didn’t tolerate disrespect. Her instinct to fight made her a “nasty woman.”

So why should we study Women’s History? The hard acknowledgment is that, like so many revolutionary women, toward the end of her life, she continued to see the neglect of women in history, and the rise of xenophobia and racism throughout the world. Although there are lights of hope, more and more history is erased, white washed, or ignored. Someone must pick up the mantle and more hands make the load light.

Gerda Lerner Biography
Why Understanding Our History Is So Important (Video)