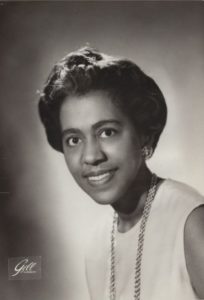 Daly was born in Queens, NY, to a family that emphasized education. Her father emigrated from the West Indies and enrolled at Cornell University to study chemistry. Her mother instilled in her a love of learning, in particular a love of science and scientists.

Daly went to the all girls Hunter College High School. After graduating, she enrolled in Queens College, receiving her B.S. in chemistry in 1942. She worked as a lab assistant to help cover the costs of her graduate degree and earned a fellowship. Both helped cover the cost of her M.S. in chemistry from New York University, which she finished in one year.

In 1944, she enrolled at Columbia University. Hard work and timing, aided Daly’s career. Because of WWII, employers needed women to fill jobs left vacant because of those fighting the war. Daly also benefited from Columbia’s chemistry program being led by Dr. Mary Caldwell, a trailblazing scientist who sought out ways to help women in the sciences.

In 1947, Daly became the first Black woman to receive a Ph.D in chemistry in the U.S. when she graduated from Columbia University. She was awarded a grant for her work on the inner workings of the human body in 1948 by the American Cancer Society. This was the beginning of her research at the Rockefeller Institute of Medicine on the proteins that construct the human body.

Daly returned to Columbia University to join a team researching the causes of heart attacks. This groundbreaking work identified the relationship between high cholesterol, clogged arteries, and heart issues. This helped create a new understanding of how diet affects your health. Daly did all of this, while teaching biochemistry at Einstein College of Medicine.

Inspired by those who helped her, she championed efforts to get more students of color and women enrolled in the sciences. Daly’s father had the aptitude and desire to become a great chemist as well. He couldn’t afford it, so he quit college and worked as a postal worker. In 1988, she established a scholarship at Queens College, in honor of her father.